My Cress Seeds Grew Beside my Wifi Router 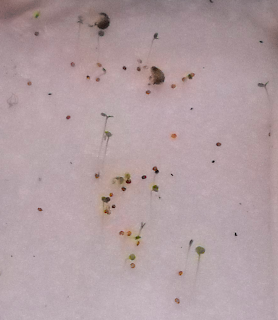 This is a close-up photo of my cress sprouts in the basement. 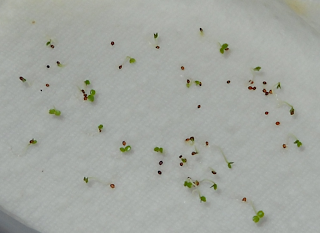 This is a close-up photo of my cress sprouts beside the wifi router in my study. If anything, these look healthier than the basement sprouts, and certainly had a higher sprouting rate.


In most science classes, teachers give a definition of truth that would cause philosophers to cringe: Truth is repeatable data.

When I read about 5 ninth grade girls in Denmark who reported that their cress seeds did not grow when placed near a wifi router, I had to try the experiment my self.

“Take 400 cress seeds and divide them into 12 trays. Then place the trays in two rooms at the same temperature, six in each room. Give the trays the same amount of water and sunlight over 12 days, but expose six of the trays to mobile phone radiation.”

“Six trays of seeds were placed in a room with no radiation, while six were placed in another room alongside two routers emitting roughly the same type of radiation as an ordinary mobile phone.”

“Then the girls just had to wait 12 days, observe, measure, weigh and take photos. The results spoke for themselves: the cress seeds alongside the routers did not grow at all, and some even mutated or died.”

The final sentence “did not grow at all, and some even mutated or died” does not make sense. A plant can’t mutate or die if it didn’t grow.  And a close look at the photo of the “sick” seeds does show some green that could be leaves.  In fact, that tray looks much like my sprouts do in the morning when I’d forgotten to water them.  Within 2 hours of watering, my sprouts usually perk up again.

But I don’t usually sprout cress on a towel.  I sprout fenugreek, or broccoli, or radishes.

So, I decided to duplicate the Denmark high school girls’ experiment.

I wasn’t able to exactly duplicate their environment.  I placed one tray of cress seeds on a damp towel beside my router, which is in my study right next to a heat vent.  Because it’s winter, and on the 2nd floor of my house, my study is one of the warmest rooms in the house.   In order to place the other tray far away from the wifi router, I put it in the basement where I usually grow my sprouts.  The basement is cooler and it has a grow lamp on a 12 hours on / 12 hours off timer cycle.  If anything, the basement sprouts had several advantages over the study sprouts.

The seeds in both locations took 5 days to sprout.  The seeds in my study sprouted a few hours before the seeds in the basement.  By day 8, both sets of seeds had healthy green leaves.

The morning of the 9th day, I noticed that I’d forgotten to water the seed in my study.  They looked nearly dead, like the ones in the girls’ photo.  But I watered them.  Within 2 hours, they were standing up again and looked healthy as ever.  Just like any other sprout I’ve ever grown.
I note here that the seeds in my study, beside the router, next to the heat vent,  did need more water than the seeds in the basement under the grow lamp.  But the main point here is that both trays of seeds grew nicely.  The proximity to the wifi router had no effect.

I don’t know how to reach these girls, but I suggest that they try their experiment again.  Since there were 5 of them, each girl could do the experiment in her own home. I do not think they can duplicate their results.  I certainly couldn’t.
Posted by geezer-chick at 10:08 AM No comments:

I was waiting at the bus stop at Market and 10th.  The bus (my bus) did not slow down.  I stepped up to the curb. I waved.  The bus driver sped right on by.

I’m not supposed to run with my replacement hip.  But I have an exemption – I am allowed to run to catch a bus.  The light was red at the next bus stop, so I ran.  The bus stopped.  It let passengers on.  I arrived just as the driver was closing the door.  It’s 15 minutes until the next bus.  The temperature was below freezing.  I stood in front of the closed bus door and willed the driver to open it.  Somebody on the bus yelled.  The door opened.

I showed my senior pass to the driver.  He glared at me.  As if anybody in good enough shape to run in the cold didn’t deserve a senior pass.

At the next stop a woman lugging a heavy suitcase got on.  She also showed her senior pass.  Somehow this is my fault?  I wish I could take credit.  Seniors in good shape are something to be proud of.
Posted by geezer-chick at 2:35 PM No comments:

Palpitations  – the doctor term for increased heart rate – terrify me.  The first time they happened, I waited a couple hours, and when my heart didn’t slow down,  I went to the emergency room.  There, numerous staffers asked me if I’d been drinking alcohol, if I’d been taking drugs, either prescribed or street. If I’d just come there for a free meal. When I explained that I don’t take drugs, prescription or street, that I’d had dinner, and I don’t drink alcohol, they accused me of lying and took 6 tubes of blood to look for proof. They also ran an EKG, to rule out a heart attack. And had me breathe radioactive air to rule out a blood clot in my lungs.

Soon, they stopped sending in people to interrogate me and hooked me up to a gadget that kept track of my heart rate, which was in the 130's.  They never apologized when they got back the report of 0 blood alcohol and no systemic drugs.  They didn’t even officially tell me. I had to ask one of the nurses.

They kept me there for 14 hours and gave me nothing to eat, and nothing to treat my elevated heart rate,  which was gradually coming down on its own. All they did was tell me to make an appointment with a cardiologist.  I did that, and they still wouldn’t sign me out, so I signed an Against Medical Advice form, and left.

One of the nurses said it was a good thing I’d come in because women’s heart attacks can take many forms.

The cardiologist sent me for a stress test.  The stress test doctor told me the name Palpitations. Finally – something I could look up on the web and in my herb books.

The heart doctor prescribed beta blockers.  I took 1/4 of one pill and it slowed my heart to 50 beats per minute, and kept it there for a day.  The next day it was 60 beats per minute. I managed to drag myself to the gym and elevate it briefly on the elliptical.  The gym is turning out to be one of my major health treatments.  I emailed the heart doctor about what happened and told him I wasn’t going to take any more. He never got back with me.

I went two years without any palpitations. I knew what to avoid. I stopped paying careful attention.  I read a review of Mary’s Gone Crackers, which talked about how delicious they are and how nutritious they are.  I bought a box. I liked them. They didn’t have sesame seeds on top like many crackers.  It never occurred to me that they had sesame seeds ground up in them. I ate a bowlful.  And then it started.  Major heart rate increase, like with tahini.

My first thought was – what’s wrong now? It can’t be sesame seeds.  I didn’t even think to read the label on the crackers for over 10 hours.

To make matters worse, my husband decided to read to me, which I love, but he came to a scary part in the story, and my heart rate got even faster.  I had to ask him to stop reading. He was disappointed.  I told him he could finish the story on his own.  He put in a bookmark, and said he’d wait until I felt better.

I decided to go to the gym and do what normally makes my heart rate increase – I got on the rowing machine and rowed full-out for 15 minutes.  That felt great briefly, but then my body did not go into relaxation mode, like it usually does.  It maintained the high heart rate.

I put on my meditation tape and meditated for an hour, while doing deep breathing.  No improvement.  Terrifying as palpitations are, the web articles say they’re not dangerous.  It seems to take about 14 hours for sesame seeds to get out of my system.

No more eating anything without reading labels. And I’m avoiding all foods that could possibly contain hidden sesame seeds at parties and restaurants.

I was never into diets. I’ve never had a weight problem.  I’ve never had to watch what I ate.I thought I was one of the lucky ones. (This is turning into a stale refrain, with the hip replacement (from being hit by a car while riding my bike) and the cancer (just because I’m human.)) So now I have to watch for foods that trigger arthritis and foods that trigger palpitations.  I guess I’m lucky it’s a short list of foods I need to avoid.

Fear of the Vagina - Zoomer

Fear of the Vagina - Zoomer
Posted by Savannah Devilles was Linda Seccaspina at 7:32 PM No comments:

A Message from the Rainbow Bridge - Zoomer

A Message from the Rainbow Bridge - Zoomer
Posted by Savannah Devilles was Linda Seccaspina at 4:19 PM No comments:

Rowing Machine Challenge at my Gym 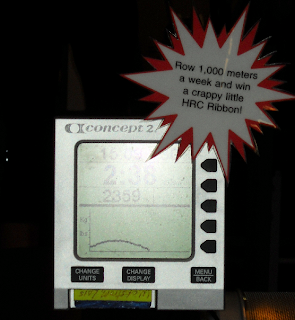 It’s that time of year again. The rowing machine company has promised to donate to a selection of charities (International Rescue Committee, Challenged Athletes Association, and others)  on behalf of people at the gym who row. But this year, they want rowers to complete 100,000 meters in 26 days  before they will make a donation.  If you are a challenged athlete, 50,000 qualifies.

I asked at the desk, they said my artificial hip qualifies me as challenged.  I felt like a wimp asking, but while I want a challenge, I don’t want to do that much rowing.

I forgot to get up 15 minutes early, so I had the same amount of time at the gym.  Wednesday is usually treadmill day. I’ll have to do treadmill tomorrow. Today I did chin-ups and hip flexors, which don’t take as much time as the treadmill.

When I sat down at a rowing machine, the one next to me was already occupied.  The man rowed over 4000 meters in 21 minutes.  He’s in better shape than I am.

One of the most valuable things I’m learning at the gym is that you can’t tell who works out by just looking at them. Plenty of men and women who are soft-looking and / or overweight are able to work out longer and harder than I can. They can lift heavier weights, move more quickly, stretch more deeply, do more repetitions.  I find it odd to look fit and yet I’m unable to do what these folks can do.

Meanwhile, the gym caters to both ends of the spectrum. They placed a sign on the data screen of the rowing machine.  If you row 1000 meters a week for 4 weeks, they’ll give you a ribbon. I’d way rather get a donation to charity.