Getting a Seat on the Bus

There’s a yellow triangle on the wall or window above the seats near the front of the bus. The words on the triangle read: “Please Yield to Disabled or Seniors.”

Usually these seats are occupied by elementary school aged children or teens listening to their tunes.  I’m strong. I don’t usually ask for a seat.

Today there was an empty seat so I took it.  A few blocks later another senior woman got on. She asked a few of the children if she could have a seat.  They ignored her.  A senior gentleman got up and gave her his seat.

A senior woman near me, who has a cane, turned to me.  “Yesterday, I asked a teen for his seat and he ignored me.  So I stood next to him and glared at him.  He said, ‘If you’re going to stand there and stare at me, you should get off the bus.’ His book bag was on the floor in front of him blocking the aisle. At the next stop, I picked up his book bag and I threw it out the door.  Then I said, ‘ Now you’re getting off the bus.’”

I wouldn’t have had the courage to do that, but I totally support her right to do that.

We're all Mad here. I'm Mad. You're Mad! - Zoomer
Posted by Savannah Devilles was Linda Seccaspina at 9:08 AM No comments:

Living With the Hard of Hearing

Hearing loss seems to be common among us geezers.  “You’re not enunciating clearly.”  “You need to pronounce your consonants.”  And the old “Look at me when you talk.”

Enough of this and I start to wonder if I’ve had a stroke, and I’m really not speaking clearly. My husband claims to have had his hearing checked and it came out in the normal range.  My visiting friend Joyce at least admits she needs to turn on the captions for hard -of-hearing when she watches television, but when talking to me, her lack of understanding is my problem.

My younger daughter just got a hearing aid.  But my adult friends won’t consider it.  It reminds me of my 91-year-old  mother refusing to use a cane because it might make her look old.  But it was okay for me to use when I needed it, because she doesn’t think I’m old.

I can speak louder. I can make sure I have their eyes on my face when I talk. This means I can’t yell up or down stairs any more, but my new hip can climb stairs, so I can make this work. Still, I keep wondering – am I doing something wrong? Am I not speaking clearly?

Last Monday, we watched Downton Abbey season 4, episode 2 on the PBS website where captions cannot be turned on. The two of them (my husband, the alien, and Joyce) constantly asked me to repeat what the characters said. They can’t all be enunciating poorly, or failing to face the camera.

It’s not that I like repeating what the actors said, in my best imitation of their intonation.  Okay, it is fun. But what I really liked was the validation that I’m speaking clearly.

According to WebMD http://www.webmd.com/news/20090601/hearing-aids-work-but-only-if-you-do
hearing aids aren’t like glasses – you can’t just put them on and hear.  It takes lots of practice in different situations.

So maybe what I really need is like what the have at the opera – an electronic display of what I’m saying.  It would be cool if it worked like a Dick Tracy watch. I could talk wherever I am, and it would display on my conversation partner’s wrist. They could press the repeat button if they don’t get it the first time.

Has anybody invented this? 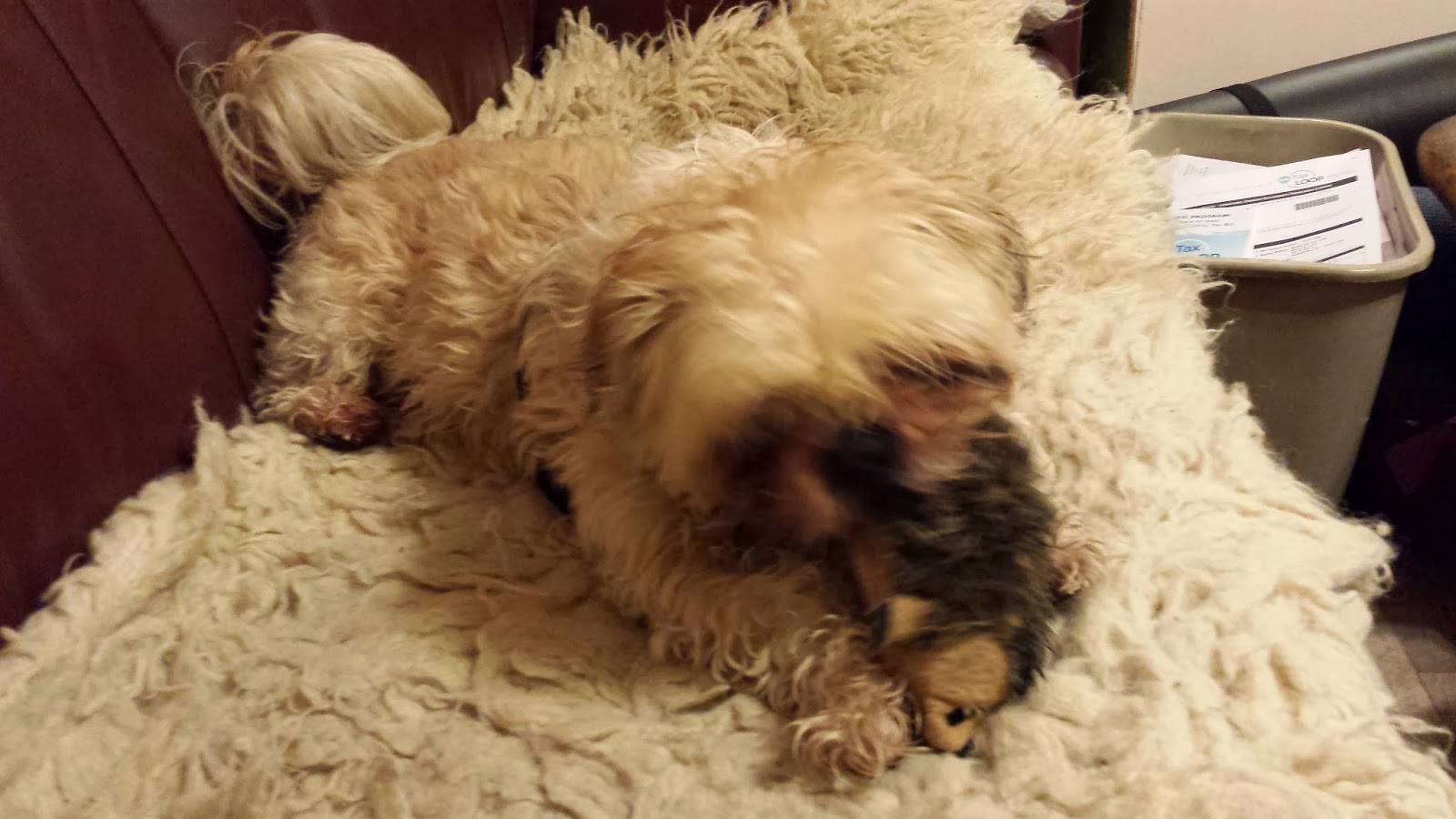 Roar is tough on toys. He prefers the kind that squeak. Unlike previous dogs, Roar is not fast enough to catch and kill a pigeon, so making a toy squeak is his pleasure.

He can get the squeaker out of most toys in a matter of hours.  He can get the stuffing out and rip the fabric to shreds in less than a week.  So, I was a sucker for a toy with the brand name Invincible.  It’s a mini-hedgehog.

The first two lasted about 4 months each.  The third one didn’t make it 12 hours.  I wrote the company.  They wrote back within minutes.  They were sending me a replacement.  It arrived with some colorful fridge magnets.  Yay for fridge magnets.

Roar is happy. I’m happy. And I think this company deserves some good publicity.
Posted by geezer-chick at 10:47 AM No comments:

Don't Tell Them You're a Senior,until you check the price!

I thought that if there was a choice between Adult fare and Senior fare that Senior would be cheaper.  It all depends.  At the aquarium yes.  Adopting a pet, yes. For riding the bus, yes.  But for basic transportation like train and Greyhound bus rides – NO!

I was planning a trip by Greyhound to NYC this weekend.  I’ve been spoiled by planning a month in advance and getting the $2 round trip ticket for the first person booking a ride on that bus.  This was only a few days ahead of time – enough to get the online booking discount, but nothing more.  Then I saw the Senior checkbox.  I checked it, thinking – this will help.  The round trip price came back at $58.

I’m going with my husband.  I tried the Companion discount.  Still $58.  Then I unchecked Senior and checked Adult. They can’t claim that seniors aren’t adults.  The price dropped to $34.

That was for each of us.  Supposedly the companion fare is half the regular fare, but both our fares were identical.

I’ve had similar experiences with Senior vs Adult on Amtrak.

It’s worth checking both prices before buying your tickets.
Posted by geezer-chick at 3:28 PM No comments: