Yesterday I met a man who was a Donald Trump fan.

He said he likes the fact that Trump is a businessman.

I said, Trump has bankrupted three companies yet managed to make millions for himself while destroying his employees’ pensions.

He said that’s just because laws allow it.  And he thinks that if elected, Trump would change the laws.

He said that Trump is already rich and therefore doesn’t need those laws any more.

So, I asked if the race were down to Donald Trump vs Bernie Sanders, who would get his vote?

He said that was a difficult choice, but probably Trump.
Posted by geezer-chick at 3:28 PM No comments:

The Pope is Coming

I admire and respect this Pope, even though I’m not Catholic.  But he’s not a rock star.  I don’t understand the magic of being in the crowd when he speaks.

I live in the green zone.  That means that buses won’t be running through my neighborhood when his eminence is here. If I drive a car out of the zone, I will not be allowed to drive back into the zone until after the Pope leaves.  I am permitted to walk or bike out of the zone and return. Some of my neighbors are leaving town for the duration.

We’re told that at least 1.5 million people will be here to see him.  These people are paying $1000 a night to stay in hotels that are walking distance from where the Pope will speak.  These people will eat in restaurants.  The restaurants are trying to figure out how they will get food with the driving restrictions.  Same for the grocery stores.  Some exceptions will be figured out.  Right now, it looks like chaos will rule.

It’s even worse for people who live in the black and red zones. These are zones where the Pope will actually be.

At this point, I don’t care if he can do the loaves and fishes magic.  I have an artificial hip, so it is unlikely I’ll be able to get through the metal detectors to hear him.  Besides, it will probably be easier to hear him from home on the internet.  In which case, why doesn’t he stay home, too?
Posted by geezer-chick at 2:45 PM No comments: 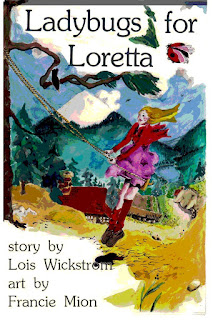 In 1978, I wrote a picture book story: Ladybugs for Loretta.  My friend Francie illustrated it.  Because our only publication option was print (ebooks hadn’t been invented yet) we decided to limit the colors to black and red.  That meant two pieces of art for each drawing and two passes through the press.  We printed 1500 copies.  We split the stack. And we sold them.

A few years ago, we had an offer from a small press to bring our book back into print, but with only black and white illustrations.  We turned them down

A few months ago, Francie emailed me – she had used her watercolor magic on all the old illustrations.  Would I please drop everything and make ebooks?

I did some minor edits to the text.

She sent me scans of all the colored art.

I used my word processor to create both doc and pdf files.  These days, that’s easy. Just click Publish to PDF.

I uploaded the PDF to Amazon.  Voila – we had a published book.

Amazon has a print-on-demand division. I sent them the PDF and a cover graphic.  Now we had the print book we’d always intended, which full color illustrations on every page.

But, we were missing part of our audience – in other words, we wanted to expand our market.

Barnes and Noble has an ebook reader called Nook that is supposed to be at least as good as Amazon’s Kindle.

I tried to upload the pdf file to Barnes and Noble. They don’t accept pdf files.

I tried to upload the doc file.  It was over 20 megabytes.  They don’t accept files bigger than 20 megabytes.

I tried using BN’s online book creator tool.  I got about halfway through the process and the website said I had exceeded my size allowance.  Plus, their book creator is flow style, which means that art and text are not necessarily on the same page.

In order to get Ladybugs for Loretta onto Barnes and Noble’s Nook platform, I went back to the pdf, made screen cuts, reduced their size, reduced their color density and reduced their pixel count.  Finally the file was less than 20 megabytes.  I uploaded it.

But the result is that the Nook book is lower quality than the Amazon book.

BN is already number 2 in the market.  They don’t need to be number 2 in quality as well.  I hope they figure this out soon.  I’ll be happy to upload a quality file to replace the current minimalistic one.

Posted by geezer-chick at 7:51 AM No comments:

This summer I reverted to elementary school.

I met up with a couple of women who were my friends in 3rd grade nearly 60 years ago.  Anne brought jacks, and Alison reminded us of the rules. 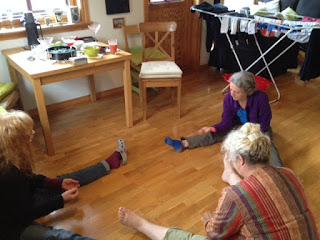 I was the only one who remembered how to use stilts, which were readily available at a museum we visited. 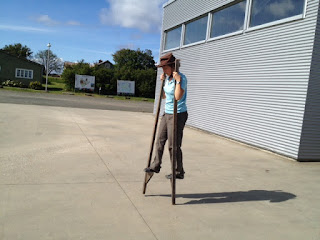 Then we made chocolate cupcakes, 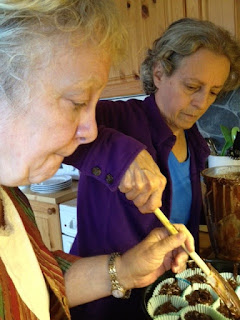 and went for a walk on the beach where we picked up rocks and put them into our pockets. 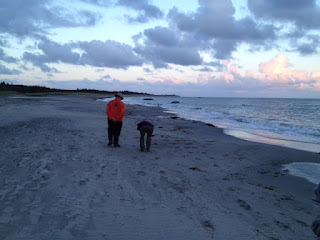 Anne also let me cuddle her toy rabbit (sorry no photo.)
Posted by geezer-chick at 2:51 PM No comments:

Many people have discussed the disappearance of honeybees across the North American continent. It is noticeable even in cities, as long as there are yards, lawns, gardens, parks, or even window boxes. For the past several years there have been fewer bees than usual.

In the summer of 2014 I decided to count honeybees on my daily walks with my dogs. I noticed Mother Nature putting big bumblebees to work pollinating the blossoms, as well as tiny sweat bees, flies, and even wasps. That summer I counted every honeybee I saw on my walks from the first one I spotted late in May to the last one before the first frost in late October--and for that entire time I counted 63 honeybees. A sad accounting.

But of course one year means nothing, so as soon as I saw my first honeybee in 2015, I began counting again. At first I thought this year would be worse than last, because not only were there no honeybees to be seen, but a new kind of big bumbler moved into our area--bees that look exactly like the big bumblers, and move in the same clumsy way, but are about half their size (still bigger than honeybees).

It was a few days into June before I saw Honeybee #1. A couple days later I saw Honeybee #2, then it was #3 and #4 on the same day--and suddenly I was seeing from four to ten bees every day! The count advanced rapidly, and by late June passed last year's count for the entire summer.

I continued counting with rising hope that whatever had caused the hive collapse might be over, and by early July my count reached 174. Approaching triple the number of bees in 2014, with three months to go.

And then the rains came, over a week of storms, torrential rains with flooding, and damaging winds. That sequence was followed by a blistering heat wave.

My bee count stopped. Since the first storms almost a month ago, I have not seen a single honeybee. The heat broke last week, giving us several lovely days with highs in the 80s before it began getting hot again yesterday, but still no bees have appeared. Actually, not even the big bumblers or their smaller cousins are back, and the wasps, flies, and sweat bees have been pollinating the proliferation of flowers we have this time of year.

So I don't know what is happening. Perhaps the honeybees collected so much pollen before the storms drove them to shelter in their hives that they are still busy processing. I'd like to think that, and I will continue to keep an eye out for their re-emergence.
Posted by jean at 3:40 PM No comments: