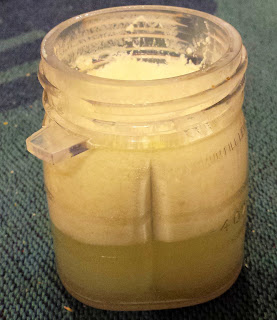 My niece was staying with us for the weekend. This always means cooking.  She had her vegetarian magazine with some new Mexican recipes.  Of course they called for fresh jalapeno peppers. I have canned ones on the shelf, but fresh is fresh.

I called my local grocery.  They had some.  The recipe also called for sweet potatoes.  They had yams.  My niece said that was fine.  So we walked Roar to the store.  My niece walked him outside while I did the honors.  Yams were in an open bin.  I took two. The jalapenos were in packages of 4.  The recipe called for one.  I bought one package.

At home I was also making yogurt.  My niece asked if we could make jalapeno yogurt.  I chopped up some jalapeno and placed it in a blender proof jar. I poured some of the warmed milk with yogurt starter (previous batch) into the jar, whirred it in the blender, and placed it with all the plain yogurt jars into the space blanket to grow.


Posted by geezer-chick at 9:19 PM No comments: 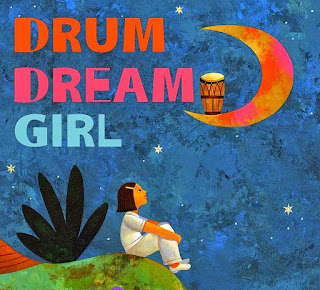 Drawing dreams has always fascinated me.  This story treats dreams on two levels: first in the “I have a dream” sense and second in the sleep-time dream sense.  Here the artist is called upon to render both. Rafael Lòpez’s interpretation is beautiful. It adds color and charm beyond the text.  And that’s saying a lot.  The text is poetic.

On an island of music
in a city of drumbeats
the drum dream girl
dreamed
of pounding tall congo drums
tapping small bongo drums
and boom boom booming
with long, loud sticks
on big round, silvery
moon-bright timbales.

This story of a girl in a sexist society who wants to do what only boys are allowed to do treats the sexism in a modern way. I don’t think it’s a spoiler to say that the girl is allowed to prove herself worthy of training.

The joy and pleasure of this tale come from the combination of rhythmic language and interpretive art.  The combo make this story a treat as a read-aloud.
Posted by geezer-chick at 4:15 PM No comments:

Defending My Sister When She's Wrong

My sister called my mother.  She told my mother that her younger daughter was upstairs packing for a trip to South America.  My mother asked if she could wish her granddaughter a good trip, and say good-bye to her.  My sister refused to interrupt her daughter’s packing.

In my opinion, my sister was wrong. As a child, I’d have been thrilled to hear my mother say my sister was wrong about anything.  “Why can’t you be good, like your little sister?”  But, I know from her emails that my sister was having a rotten day. And I know that saying No to our mother has been a hard won battle for my sister. So, while this was upsetting for my mother, and probably for her younger daughter, if she finds out about it, I’d rather my mother practice forgiveness than indulge her in a grouch-fest.

I’d have enjoyed agreeing with my mother that my sister was wrong. But the price was too high.

So, I defended my sister. Told my mom about my sister’s bad day. Asked my mom to try to understand. And felt guilty the whole time because my mother is the one who taught us about right and wrong.
Posted by geezer-chick at 11:54 AM No comments: