No humans are native to the Americas.

Everybody who lives in the Americas today either came here personally, or is descended from someone who did, or who was dragged here against their will.

The people who live in this hemisphere are adventurers, people who want a better life for themselves and their families, explorers, pioneers, and survivors.

We can discover where people came from by looking at the DNA in their mitochondria. Mitochondria are transmitted by eggs only.  Not sperm. Mitochondria are in every cell of our bodies. They contain DNA that is not in the cell nucleus. This DNA is from the mother only. Mitochondrial DNA is the same in all children of the same mother, the same maternal grandmother, and so on through the generations.

People aren’t native to Siberia either. People originated in Africa. But since that happened a long time ago, people tend to describe themselves in terms of the country they lived in before they came to the Americas.

Therefore, I propose the term Siberian-Americans or First Americans as the most accurate term to use, rather than “native Americans” or “indigenous people.”
Posted by geezer-chick at 2:40 PM No comments:

I just visited the pop-art exhibit at the Philadelphia Museum of Art.

Two exhibits I hadn’t seen before fascinated me for different reasons.  The first because I’m taking a drawing class. The effectiveness of this minimalist drawing comes from the ability of the artist to pick out the identifying characteristics that prompt recognition. 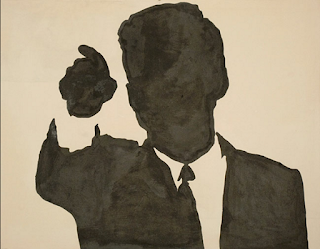 And the second because I used to collect pop bottles and take them to the store for the 3 cent refund.  It never occurred to me to read them, let alone look for secret messages. 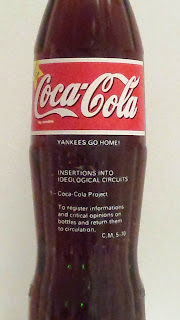 Then again, they were tricky to read when empty. 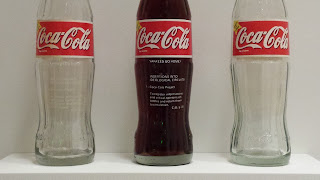 Posted by geezer-chick at 3:40 PM No comments:

The Wisdom of Radishes

In the scientific community, there’s a saying: “Truth is repeatable data.”

Before publishing a paper in a scientific journal, the researcher is expected to make sure the results can be duplicated.

Other labs are also supposed to be able to follow the directions in the published paper, and see duplicate results.

Most of the time, this works. Most scientists are honorable people who care about Truth.

Therefore it makes the news when somebody attempts to duplicate an experiment, and gets different results.

This week the culprit is a paper about depleting ego. In this experiment, the researchers baked chocolate chip cookies.  And while the room was still filled with the warm enticing aroma, they put out a plate of the freshly baked cookies, and a plate of radishes.

The researchers then asked one group of students to eat the radishes, and another to eat the chocolate chip cookies.

In this case, it’s not the data that constitute Truth. It’s the interpretation of the data.
Posted by geezer-chick at 1:34 PM No comments:

Getting an idea for a new story is a high.  Writing it, solving the problems that come up, bringing it to a satisfying conclusion is another high. Then I let it sit for a week or a month. And if I still like it (often after some tweaks and twiddles, or maybe a plot twist or five) I take it to my writing group.  If they have suggestions that make sense to me, I do another round of rewrites.  Then I send out to agents and editors.

Then come the rejects.  I’m no piker at this.  I have a list of agents who sell the sorts of things I write.  I’ll do 4 at a time for weeks.  My list has over 100 agents.  I also have about a dozen publishers on my list, who read unagented stories.  The rejects pour in.

And I wonder if I’m fooling myself.  My friends know enough to be critical of my work.  If they say they like it, they mean it.  They know I appreciate a good criticism far more than praise, even if in their opinion, it’s earned.  I’m not good at accepting compliments.

But over 100 rejects.  What does that mean?  I’ve certainly read about books that became famous best sellers getting rejects before they were published.

I’ve also had books published. My books have won awards.  But they don’t sell well once they are published, which makes publisher hesitant to accept work from me.  My books are not profitable.  They’d rather have a new name.

So, after much consideration, I created a new name and an email address to go with it.  So far, the story I’m sending out with that name is getting rejects.

This story is a picture book. Therefore, I decided to commission a cartoon based on the story. Once that is complete, I’ll enter it into contests for animated cartoons under 15 minutes.

There must be some way to get an audience for my stories.  And get some income from them. A few days of being high is not reward enough.
Posted by geezer-chick at 3:17 PM No comments: