Vote for the Delegates

I’ve been excited about this Presidential election.  For the first time in many years, a candidate who has a chance of winning is saying what needs to be said.  Yay, Bernie!

I’ve been giving out literature telling people where and when their polling place is open.

Only yesterday, I learned that pressing the button beside Bernie’s name isn’t enough.

In addition to voting for Bernie, I need to vote for delegates to go to the National Democratic Convention.

Philadelphia PA gets 10 delegates.  The ballot listed 6 Bernie delegates and 10 Hillary delegates, plus 1 Hillary alternate. Since it is unlikely that either candidate will get more than 60% of the vote, voting for 6 is enough.  But it looks like voting for the delegates is more important than voting for the candidate, since they will cast the votes at the convention where the decision will be made.

I see no sense in this extra layer of voting.  Since it exists, I see no sense in keeping it a secret.  I’m one of those people who never read the agreements when I install software on my computer. I just agree to whatever it says.  When I actually have a choice, I want to know the full meaning of all the fine print.

Vote for the delegates.
Posted by geezer-chick at 3:29 PM No comments:

Your Face Will Freeze That Way 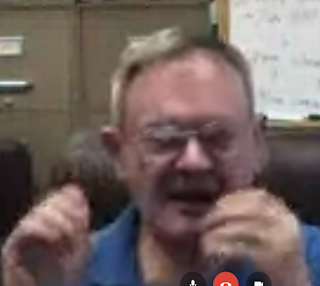 Google Hangouts was slow and pixelated.  One of the threats from my childhood finally came true.

Posted by geezer-chick at 1:21 PM No comments:

This morning, while walking my dog, I saw men using power tools to destroy sidewalk. They looked like somebody had hired them to do this – it wasn’t wanton destruction. Powdered cement filled the air.  I walked my dog upwind and noticed that the men were not wearing masks.

I stopped and asked them if they had dust masks to wear.  No, they hadn’t been given masks. They seemed to think this was an odd question.  I thought about going to the hardware store, buying masks and bringing them back. But I didn’t think these men would wear them unless their boss ordered them to do so.

Instead, I called 311.  This is the number for all and sundry city questions. Clearly the representative had never had such a question before. I kept being put on hold.  Finally she said she’d take care of it.

I’ve heard that before.  I’ve been trying to get a collapsed sidewalk over a street drain repaired for months.  The sidewalk now has two orange warning cones on it.  No repairs.

I’ve been trying for years to get them to repave Girard Avenue. They repave other streets in far better condition every few years (they buy poor quality asphalt, probably for short term savings), but they ignore Girard.

When I reported a fallen electrical line, they had that fixed within a few days.

When my husband reported a monster pothole, they sent him an email claiming they had fixed it. They hadn’t.  He reported it again, with a photo from his cell phone.  They came out and really fixed it.

Sometimes calling them works.  These guys won’t be working on this spot in a few days.  This is the kind of thing that needs to be done today.  I think it would be great if police cars had stashes of dust masks in their trunks and police, doing their rounds, could hand them out.  The men would not refuse to wear something the police gave them.
Posted by geezer-chick at 1:00 PM No comments: